The Protestant Reformers and Scripture

Free and Open to the Public

Why Should I Attend?

Five hundred years ago, Martin Luther published his “95 Theses” which set into motion new thinking that turned upside down the religious, cultural, and political thinking of Roman Catholic Europe. Protestant reformers believed that the Bible, not tradition, should be the source of spiritual authority. Come hear Dr. Pak explore the church’s relationship with Scripture as the Protestant reformers saw it, and its importance for us today. 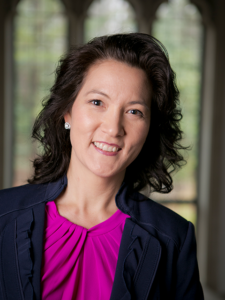 Dr. G. Sujin Pak served as Associate Dean of Academic Programs at Duke Divinity School from 2012-15 and has been a faculty member there since
2008. She specializes in the history of Christianity in late medieval and early modern Europe. She is a graduate of Emory University, where she earned her B.A., double-majoring in religion and psychology.

Dr. Pak’s teaching, research and writing focus upon the theology of the Protestant reformers, the Protestant Reformation and the Jews, women and the Reformation, the history of biblical interpretation, and, more
recently, views and uses of prophecy in the early modern era. She has published two books, one entitled The Judaizing Calvin: Sixteenth-Century Debates over the Messianic Psalms (Oxford University Press,
2010) and another forthcoming with Oxford entitled The Reformation of Prophecy: Early Modern Interpretations of the Prophet and Old Testament Prophecy. Dr. Pak has also written several articles in journals such as Church History, Reformation & Renaissance Review, Religions, Calvin Theological Journal, and Church History and Religious Culture.

Dr. Pak lives in Durham, NC and is married to Ken Boyer, a Presbyterian who also grew up as a missionary kid in South Korea. She and Ken have two daughters, ages 10 and 12. In addition to her love of historical novels, Dr. Pak is an athlete who enjoys a variety of sports, particularly basketball, volleyball, and running.

9:30 AM: The Telos of Scripture and the Literal Sense
What the Protestant reformers believed was the main reason for reading scripture.

7:00 PM: The Perspicuity (Clarity) of Scripture, Justification by Faith Alone, and the Role of the Church
Three key contributions of the Protestant reformers and how they are interconnected.

7:00 PM: Scripture, Prophecy, and the Priesthood of All Believers
How the Protestant reformers, using Scripture, sought to carve out a middle ground between the Roman Catholic church and a more radical approach.

Participants can earn .5 CEU with attendance of three or more sessions