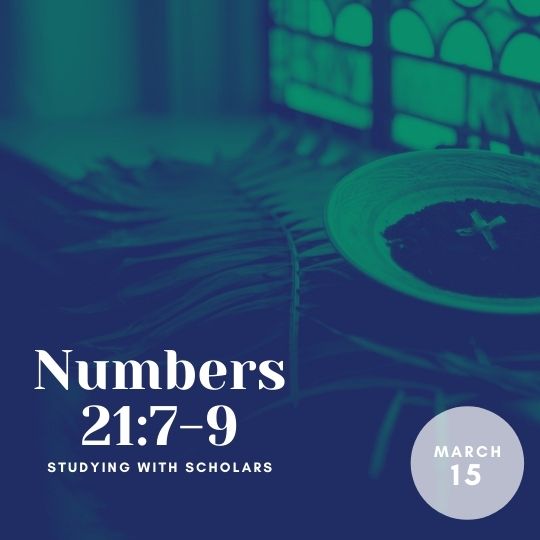 Written by Leah Wise, a student at Yale Divinity School

The people came to Moses and said, “We have sinned by speaking against the Lord and against you; pray to the Lord to take away the serpents from us.” So Moses prayed for the people. And the Lord said to Moses, “Make a poisonous serpent, and set it on a pole; and everyone who is bitten shall look at it and live.” So Moses made a serpent of bronze, and put it upon a pole; and whenever a serpent bit someone, that person would look at the serpent of bronze and live.

The Exodus narrative (which is retold in Numbers) is full of stories of God’s people complaining to Moses as they wander through the wilderness. In Numbers 21, the Israelites finally summon the courage to complain directly to God. Their suffering has gone on long enough. But just as they think they don’t have the strength to survive another calamity, poisonous snakes take over their camp in pandemic proportions, ravaging the community. The death toll rises. The future is uncertain as ever.

So God commands Moses to make a bronze serpent on a pole. Though it’s hard to know what this actually looked like, what comes to mind is the medical symbol, except with one snake, not two. In any case, healing happens here. When the afflicted Israelites gaze upon it, they recover from their poisoning. They live to see their future, however uncertain it may be.

Many theologians have suggested that this serpent on a pole foreshadows the cross. Anyone who gazes upon that indignity of Christ crucified sees life.

But, unlike the serpent on the pole, Christ doesn’t remain on the cross. No, he gets down and walks with us. He appears to us in the midst of our grief, and in the midst of our chaos. He beckons us to look and listen for signs of the Kingdom of God as we wander through uncertain terrain. We are tired and fearful, but the full story of Scripture reminds us that Christ knows our deepest suffering. He heals us over and over again, though not always in the ways that we expected or hoped for.

Sometimes, we think that following Christ is like becoming that serpent on a pole. We’re supposed to slither up and wrap ourselves tightly around suffering to prove something to God. But Christ got off the cross. He beckons us to grab his hand, get down from the cross, and keep on the path of the Kingdom of God. A path that always leads toward hope. We have already been redeemed. Thanks be to God!