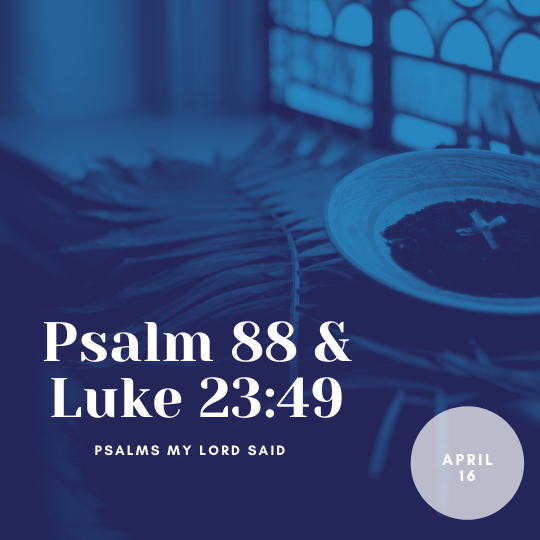 A song, a psalm for the Korahites, for the lead player, on the mahalath, to sing out, a maskil for Heman the Ezrahite.

Lord, God of my rescue,

by day I cried out,

by night, in your presence.

May my prayer come before You.

Incline your ear to my song.

For I am sated with evils

and my life reached the brink of Sheol.

I was counted among those who go down to the Pit.

Among the dead, cast away,

like the slain, those who lie in the grave,

whom you no more recall,

and they are cut off by your hand.

You put me in the nethermost pit,

in darkness, in the depths.

Your wrath lay hard upon me,

and all Your breakers You inflicted.

You distanced my friends from me,

You made me disgusting to them;

imprisoned, I cannot get out.

My eyes ache from affliction.

I called on You, Lord, every day.

I stretched out to you my palms.

Will you do wonders for the dead?

Will the shades arise and acclaim you?

Will Your kindness be told in the grave?

Your faithfulness in perdition?

Will your wonder be known in the darkness?

Your bounty in the land of oblivion?

As for me—to You, Lord, I shouted,

and in the morn my prayer would greet You.

Why, Lord, do You abandon my life,

do you hide your face from me?

Lowly am I and near death from my youth

I have borne Your terrors, I am fearful.

Over me Your rage has passed.

Your horrors destroy me.

they encircle me completely.

You distanced lover and neighbor from me.

The eighty-eighth psalm is a psalm of lament. The Psalmist cries out from “the depths”—praying for rescue, questioning the faithfulness of God. Like other psalms of lament, the speaker begins in distress, tired and afraid, “distanced” from friends and family, alone in their despair. They envision their experience in vivid terms: the loneliness of being stranded at the bottom of a pit after dark; the terror of drowning in the sea as waves continue to break overhead. But unlike all of the other lament psalms, Psalm 88 ends there. It refuses movement—there is no turn in the end toward hope or praise, no thanksgiving for deliverance. The speaker and their prayer remain, in the final lines of the psalm, in “utter darkness.”

In the middle of this prayer, the speaker poses to God a series of what appear to be rhetorical questions: “Will you do wonders for the dead?…Will your kindness be told in the grave, your faithfulness in perdition? Will your wonder be known in the darkness?” Biblical scholars often explain these questions as the Psalmist’s daring attempt at bargaining as they try to make the case that they are of better use to God alive than dead. Within the frame of the psalm, these questions receive no response: God remains “hidden” and the psalmist afraid and alone.

As bleak as it is, Psalm 88 may still be a comfort to those who find themselves raising their fist at God as they pray. The text canonizes the speaker’s distress together with this series of questions, refusing to sand off the sharp edges in their tone. Together with so many hymns of praise, the psalter makes room for the loneliness and even the anger of unanswered prayer.

Some commentators make a connection between Psalm 88 and Luke 23:49—a moment in which Luke’s gospel tells its reader that even those few followers of Jesus who didn’t flee the scene when he was arrested stood “at a distance” to witness his crucifixion—leaving him alone, near death, in the strange midday darkness described by this gospel. While the writer of Luke may or may not have been consciously alluding to Psalm 88 when he wrote the phrase “at a distance,” there is something remarkable about this connection. To imagine Jesus in the position of the speaker of Psalm 88—perhaps the bleakest of all the psalms—enables us to reflect on different dimensions of his suffering, what Acts 2:24 terms the agonies (plural) of Jesus’ death.

But there is yet another possibility here. To see a connection between Psalm 88 and the scene of the crucifixion—to imagine this cry of dereliction together with the one Jesus speaks from the cross—reminds us that in the Christian tradition, the questions raised by the speaker of this prayer (whether the wonders or kindness of God extend to those in the grave) are answered in the very next moment.

In one of the more mysterious phrases of the Apostles’ Creed, we rehearse the belief that after Christ was crucified and before his resurrection, he “descended to the dead.” The church mediates on this mystery each year during the space between Good Friday and Easter Sunday. What might it mean that Jesus descended to the dead? Does Jesus teach in parables and perform miracles for the dead as he did for the living? Does he break the chains of the dead, releasing them from captivity, as 1 Peter 3:9 imagines? Or should we imagine instead that Jesus just remains there for a time, accompanying the dead in death, sharing in another element of human experience?

However we think about Holy Saturday, the belief that the incarnation of Jesus extends even to death provides a striking response to the barbed questions raised by the writer of this Psalm—questions they raise in protest, confident in their sense both of the limits of power of God and the bounds of human life. Will Your wonder be known in the darkness? Yes. The wonders of God extend even to the grave, even to those prayers that reflect the limits and obscurities of our own understanding.