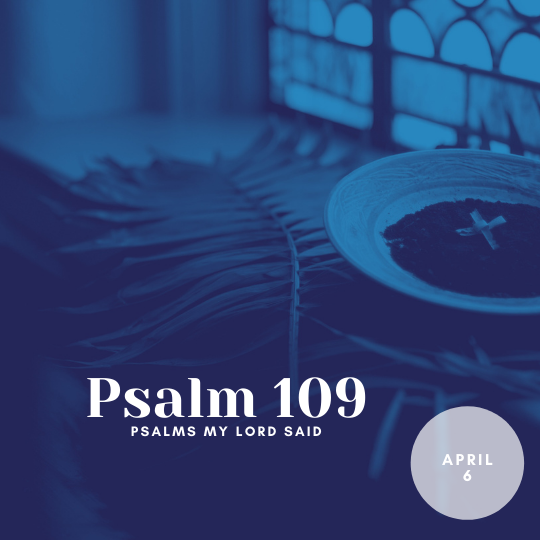 for the mouth of the wicked,

the mouth of the deceitful, is opened against me.

they encompass me with hateful words

and fight against me without a cause.

but as for me, I pray for them.

and hatred for my love.

and let an accuser stand at his right hand.

and let his appeal be in vain.

and let another take his office.

and his wife become a widow.

let them be driven from the ruins of their homes.

and none to pity his fatherless children.

and his name be blotted out in the next generation.

and his mother’s sin not be blotted out;

but let him root out their names from the earth;

but persecuted the poor and needy

and sought to kill the brokenhearted.

he took no delight in blessing,

let it depart from him.

and to those who speak evil against me.

oh, deal with me according to your Name; *

for your tender mercy’s sake, deliver me.

and my heart is wounded within me.

and my flesh is wasted and gaunt.

they see and shake their heads.

save me for your mercy’s sake.

that you, O LORD, have done it.

let those who rise up against me be put to shame,

and your servant will rejoice.

and wrap themselves in their shame as in a cloak.

in the midst of the multitude will I praise him;

to save his life from those who would condemn him.

It’s the children that get me, every time. This psalm—this prayer that God and the brilliant hymnists of ancient Israel have given us to put on our lips, to offer up as praise—asks God that children might be orphaned, that they might be reduced to beggary, that they might be driven from the ruins of their homes. I dread this psalm coming up in the rotation for Morning Prayer; I know intimately the sour feeling that settles into the pit of my stomach as my sleep- and coffee-deprived mind wakes up to the realization of which psalm we’ve just begun praying (“Set a wicked man against him…” is usually when it happens). This is the psalm that threatens, every time, to break my understanding of what the Psalms are: the prayers God has given us to teach us how to pray, forming us into the faithful covenant-partners of the Lord; the prayers of Jesus himself, a window into the way the Father is loved by the incarnate Son. But how can this be the prayer of our Lord? How can we imagine these words as the words of Jesus?

Any answer to that question—any answer that doesn’t evade the difficulty of this prayer, at least—has to start from an appreciation of the psychological depth this psalm shows. This is a psalm that gives lie to any easy descriptions of the Bible as “a manual for life,” or some trite sentiment of the sort. If we take this psalm as a depiction of the sort of person God wants us to be, we’ll very quickly become monsters (and reading the Bible wrongly has made a great many people monsters). This is a psalm that’s trying to do something to us—it’s trying to draw us into its trap. Become, it’s asking us, the sort of narrator the psalmist imagines: one who has been truly, devastatingly wronged by very particular people; one who has been made like a shadow at sundown, twisting into an encroaching darkness. Be that person, if just for a moment; you may, someday, find yourself inhabiting that position more convincingly. Imagine the anger, know yourself to be passed over and ill-used—drink the cup of your resentment to the dregs. And then open your mouth.

Feel—really feel—what it’s like to put a curse on your lips. It’s going to feel wrong at first; you’re a good person, you’re not the sort who would genuinely wish another ill. But don’t let yourself off that easily, the psalmist is telling you. Set an accuser at his right hand—let him get his comeuppance, let the world finally see this person for who he is. That’s the gateway drug; that’s the moment in which the psalmist is drawing us into the shadows more deeply. Who hasn’t wished that a bad person who’s wronged us would finally be publicly exposed, and fall in the estimation of his (and our) peers? He’s guilty; let him be judged to be so. Is that too much to ask? Let him be stripped of all the honors, all the prestige; let him be replaced. (By me?)

It’s cathartic to think this way, especially when you’ve been hurt. It’s seductive, too: you get used to cursing, especially when you know you’re on the side of the good. But the psalmist knows where this road leads: if we fail to show mercy, if we fail to learn how to love our enemies by first listening to the cries of the poor and brokenhearted, we will fall in love with cursing. You can see it happening in this psalm: what starts as a prayer for a just judgment curdles soon into a desire that one’s enemy’s children will be starving in the streets. Let there be none to pity his fatherless children—who is it supposed to be, again, that has forgotten to show mercy, that has persecuted the poor and needy, that has sought to kill the brokenhearted?

The psalm asks us to put on cursing like a garment; it invites us to feel it soaking into our bodies like water, and into our bones like oil. It forces us to remember that even as we may curse, God will bless—we who have been wronged, and even the enemies who have wronged us. By asking us to make this prayer our own, it effects a substitution: we, who take ourselves to be innocent, quickly surrender ourselves to the curse.

Christ redeemed us by becoming a curse for us, Paul tells us in Galatians. Christ redeems us by putting on our curse as a garment, letting it soak into him like water, letting it sink into his bones like oil—and yet, because he is the LORD, he still blesses. He is mocked; “those who passed by derided him, shaking their heads” (Matthew 27.39). He makes our sin his own, carries in his body the full horror of a world that would pray for children to be orphaned, hungry, and subjected to the violence attendant to homelessness. He delivers us through the same substitution we find in this psalm: the wronged person who comes to occupy the place of the one cursed with cursing; the innocent who is judged and found guilty in our place. Despite his love, we accuse him—and nevertheless, he prays for us: Father, forgive them, for they know not what they do.