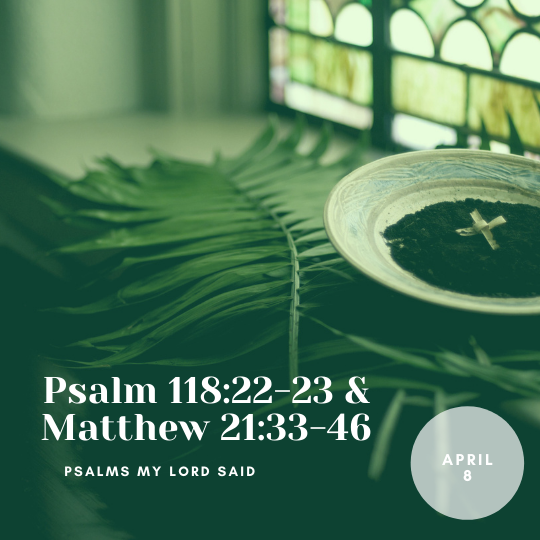 The stone that the builders rejected
has become the chief cornerstone.
This is the Lord’s doing;
it is marvelous in our eyes. – Psalm 118:22-23

When I was 23, I listened to the whole Bible as an audiobook.  I worked for a moving company, and I spent 4-5 hours in the car every day – driving around the DC area, visiting people’s homes and helping them get ready to move.  And, so, at some point, I decided to start listening to the Bible as I drove.

I remember sitting in the parking lot of a grocery store one afternoon, eating lunch out of a cooler, listening to the Bible, when these words struck me.  I remember thinking that I’d heard these words before – and, I had.  This quotation from Psalm 118 is repeated 5 times in the New Testament – in the Gospels of Matthew, Mark, and Luke, along with the books of Acts and 1 Peter.  I remember thinking that these words must have meant a lot to the early Christians – to the people who wrote the New Testament – otherwise, why would they repeat them so frequently? I remember being struck by the power of the imagery – God has taken something rejected, something deemed unworthy, and made it essential.  The cast-off has become the foundation.  The outcast has become the heart of the community.  Human wisdom tells us that it’s worthless – but God’s wisdom makes us look foolish, and shows us that it is of infinite value.

In the Gospel of Matthew, Psalm 118:22-23 is quoted as part of a parable – a short story Jesus tells to illustrate a deep truth about God.  This parable (Matthew 21:33-46) is often called “The Parable of the Wicked Tenants.”  In the story, a landowner plants a vineyard and leases it to some tenant farmers.  When the landowner sends servants to collect his share of the harvest, the tenant farmers refuse to pay what they owe – instead, they reject, beat, and even kill the messengers who are sent to them.  So, the landowner decides to send his son – assuming that the tenants would never hurt the landowner’s beloved son.

But, of course, the tenants are wicked, and so they kill the son, figuring that, with the son out of the way, the land is theirs for the taking.  So, Jesus says, the landowner will now surely take the vineyard away from the wicked tenants and give it to new tenants who will fulfill their obligations.  In other words, Jesus says, “the stone that the builders have rejected shall become the chief cornerstone.”

There are two essential ways of reading this parable that I want to highlight.  The first is as a challenge to the religiously powerful – and to everyone who thinks they have a monopoly on God’s love.  When we exclude folks because they seem unworthy, unfit, or outside God’s grace, we put ourselves on the wrong side of this parable. If we think we are holier than someone else, we should be wary.  If we think that someone else doesn’t deserve to be part of God’s people, then we should think again – because God has a habit of choosing the outsider and welcoming the outcast. God, it seems, is the kind of builder who rejects the proper building materials and instead prefers to work with the stones that we have rejected.  Jesus is warning religious insiders (people like us) not to look down on others – because God is ready to welcome the people who we think least deserving of it.

The second essential way of reading this parable is as a reminder that Jesus is the “stone that the builders have rejected.”  God is the one who owns the vineyard, and Jesus is the beloved son who was sent to us.  We rejected him – we killed him.  And, yet, the one who we rejected is, in fact, the foundation of the universe.  God’s upside-down grace means that the Creator of the universe was crucified as a criminal, the King of kings took the form of a slave, the Lord of Life was handed over to death.

And, what’s crazy is how God responds.  By the world’s way of doing things, God should respond to the violence of the wicked tenants with even more violence.  The kings of this world would get revenge.  But that’s not the kind of god that our God is.  Instead of responding to our sin and violence with destruction and revenge, God responds with mercy.  Through the death of God’s beloved Son, we, the wicked tenants, are saved – ushered into new life.  We cheat and we steal, we run away from God, we are selfish and self-centered – and God forgives us anyway, sends God’s Son to save us anyway.  The stone that we rejected should be used to crush us – but, instead, it is the foundation of our new beginning.

Jesus Christ, the perfect Son of God, gives himself up for us, in all our sin and failure.  We rejected him, and yet God glorified him, raising him up into eternal life on the third day.  Jesus Christ was rejected for us, and because of that, he is the foundation, the chief cornerstone – not just of our faith, but of all that ever was, is, or shall be.

The stone that we rejected has become the chief cornerstone.  This is the Lord’s doing, and it is marvelous in our eyes.  Amen.