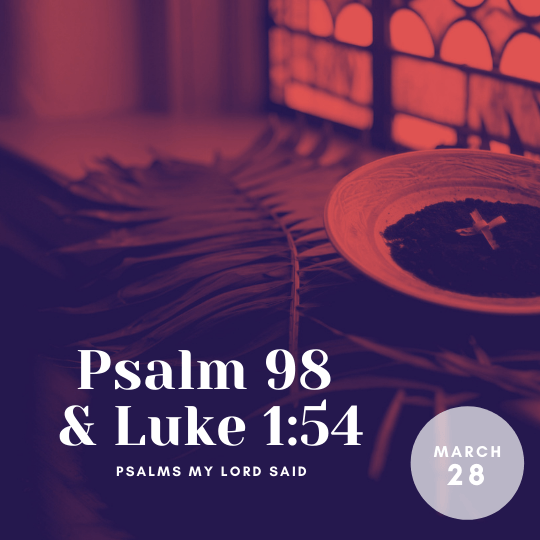 O sing to the Lord a new song, for he has done marvelous things!

Psalm 98 isn’t a very “Lenten” Psalm. After all, Lent is supposed to be serious and somber. We put away our Hallelujahs and exchange them for ashes. We give up sweets and meat to enter into a season of fasting. We sing in minor keys and quietly and politely whisper our confessions.

But Psalm 98 seems to ignore all our rules about Lent. There is little that is quiet or minor about this Psalm. There is no holding back or restraint present here. Instead, the Psalmist boldly proclaims that we sing to the Lord a new song! And the reader is to be joined with a cacophony of voices–the seas and the hills, the trumpets and the horns, the entire earth is to break forth into joyous song!

God’s revelation has that effect on us.

Thousands of years later, when an angel appeared before Mary to reveal that she would conceive a child called the Son of God, Mary had a Psalm 98 moment. Overwhelmed with joy, full of grace, Mary could not contain this revelation and she burst into song– My soul magnifies the Lord, and my spirit rejoices in God my Savior! (Luke 1:46-47).  In fact, she even goes on to quote directly from Psalm 98: He has helped his servant Israel, in remembrance of his mercy.

Psalm 98 seems to know something that those of us stuck in Lent often forget. That Christ has already won. We have already received his victory!

For us, in the season of Lent, we are still awaiting the victory that comes at Easter. But today we get a glimpse of what has already come. And it’s enough to make us want to burst into song.

O sing to the Lord a new song, for he has done marvelous things!

He has remembered his steadfast love and faithfulness to the house of Israel.

Make a joyful noise to the Lord, all the earth; break forth into joyous song and sing praises.

Let the sea roar, and all that fills it; the world and those who live in it.

Let the floods clap their hands; let the hills sing together for joy.