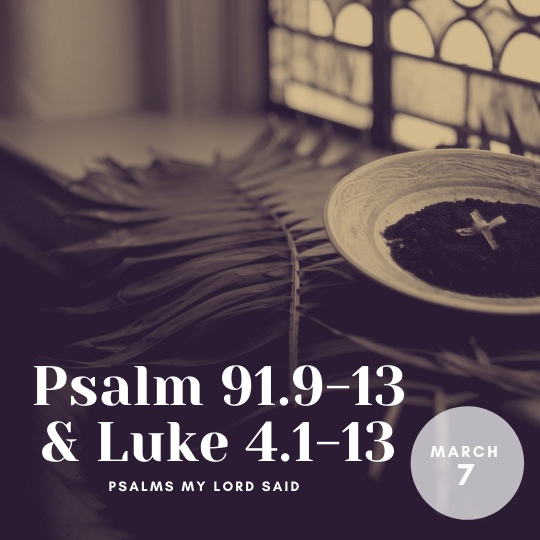 The temptation scene set out in the wilderness really is as strange as it sounds. And when you take a step back from the whole thing you can’t help but notice that Jesus and the Devil aren’t even really talking to one another.

“If you really are God then prove it Jesus.”

Jesus’ response: “I really am God, so I’m not going to do anything.”

And the devil actually has some good suggestions for the Messiah: Why starve yourself

And, perfectly, Jesus responds to each of the temptations by quoting scripture right back into the Devil’s face.

The devil here, frighteningly, actually sounds a whole lot like, well, us. His ideas are some that we regularly champion both inside, and outside, of the church.

Who among us wouldn’t want to give food to the hungry?

Who among us wouldn’t like to see how politics get in order?

every once in a while?

But Jesus, for as much as he is like us, he is also completely unlike us. For, in his non-

answer answers he declares to the devil, and to all of us, that power, whether it’s over creation, politics, or miracles, doesn’t actually transform the cosmos.

Jesus, in his refusal to take the devil’s offers, reminds us that we, humans, are obsessed with believing that power (and more of it) will make the kingdom come here on earth.

We’ve convinced ourselves, over and over again, that if we just had a little more control, if we just won one more fight, if we could just get everyone to be exactly like us that everything would turn out for the best.

But it never does.

Therefore, though it pains us to admit it, Jesus seems to have a point in his squabble with

the Adversary. Because the demonic systems of power, even those under the auspices of making the world a better place, often lead to just as much misery, if not more.

The devil wants to give Jesus a short cut straight to ends that Jesus will, inevitably, bring about in his own life, death, and resurrection.

Or, perhaps better put: The devil wants Jesus to do what we want to do.

But here’s the Good News, the really Good News: Jesus is able to resist temptations that we would not, could not, and frankly do not.

Even at the very end, when Jesus’ hands are nailed to the cross, he is still tempted by the Adversary through the voices in the crowd: “If you really are who you say you are, save yourself!”

But at the end Jesus doesn’t respond with passages of scripture. He doesn’t offer a litany of things to do or things to avoid. Instead, he dies.

Instead of saving himself, Jesus saves us.