A New Twist on an Old Tradition 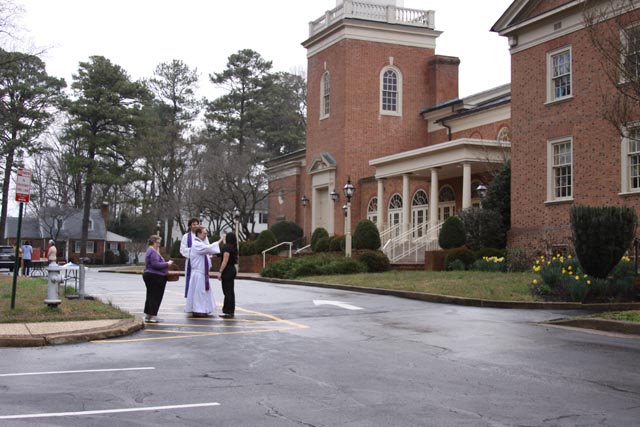 On Wednesday, March 1, Trinity added a new way to observe Ash Wednesday. In addition to the noon service and the service at 6:45 p.m. (both which we have had in years past), we added a time of 7-8 a.m.

for persons who wanted to come first thing in the morning to receive ashes to bear witness to their faith all day. An added bonus for these early risers was free coffee! Teresa Given and her committee were ready providing coffee, and Pastor Larry and Pastor Drew were on hand to impose the ashes. We even had members of our youth group who held up signs to welcome passers-by. We didn’t know if anyone would show up – but 87 people did!! Many came in cars, some walked, and one arrived via bicycle!

One individual received his ashes then came back for a second imposition. Turns out he went to the gym to work out, then took a shower, washing the first ashes off. Pastor Larry was more than willing to impose ashes on him a second time. Then there was a Muslim man who came up – he said he didn’t want ashes – but just wanted to let us know what a powerful witness we are to the community, having ashes early in the morning. He and Drew exchanged blessings. A powerful witness indeed.

So an idea in a staff meeting became a powerful witness, serving 87 people who wanted to witness to their faith for the entire day. Thanks be to God!