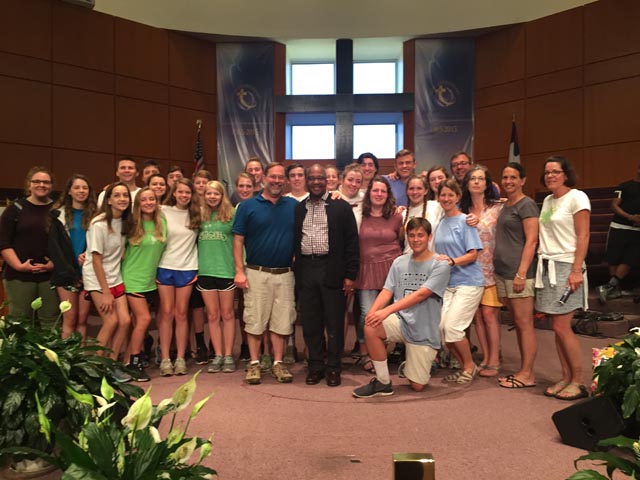 Teens, nowadays! It’s not a new phenomenon that adults are befuddled by the choices teens make. For example, twenty-one Trinity teenagers and seven chaperones recently spent a week of their summer vacation in Boston serving the poor, the hungry, the homeless and the mourning. They chopped onions for a feeding ministry, they moved boxes for a housing ministry, they visited with the homeless who wanted nothing more than a conversation, and engaged with people who had lost loved ones.

A typical day meant rising before dawn, driving 2 miles away for a shower, squeezing in a quick breakfast,
preparing for the day with a devotion, and

loading vans to the brim before heading out to whatever service was calling them that day. Six hours later they would have a sack lunch and serve at a second location before dinner. Evening devotions were followed by brief free time before dropping off to sleep on air mattresses. Then these committed teens and chaperones would rise the next day and do it all over again.

Even the mission staff in Boston noted that this group of teens never uttered a complaint. The Trinity crew worked so quickly and so efficiently that extra work was often sought for them and completed by them.

A memorable moment came as a result of a prayer tour. On Day 1 in Boston, the Trinity vans stopped at the Morningstar Baptist Church which had just held funerals for two teens lost in gang violence the prior week. The youth pastor for the church spotted our crew, asked what they were doing and invited them back to attend the Wednesday night worship service. This invitation created a dilemma, as Wednesday afternoon was the only free day during the trip and the only sightseeing opportunity for the week. Without hesitation, this group of teens changed their free day plans to make sure they could attend the worship! The Morningstar congregation welcomed them with open arms and was immensely touched to have Trinity teens and chaperones praying for them and with them. Trinity youth described the experience as “emotional”, “life-changing”, “too rich for words”, and “freakin’ sick” (which, by the way, is high praise). Morningstar and Trinity members were deeply moved by the shared worship experience.

Trinity teens know a person cannot learn to swim by sitting in a classroom. The only way to become a swimmer is to get in the water! The same is true for discipleship. Summer mission trips allow our youth to immerse themselves in the work of Jesus, and they did so dutifully and humbly in Boston. That’s our teens, nowadays!

Learn more about our youth ministry (T.Y.M.) on our Youth Page.