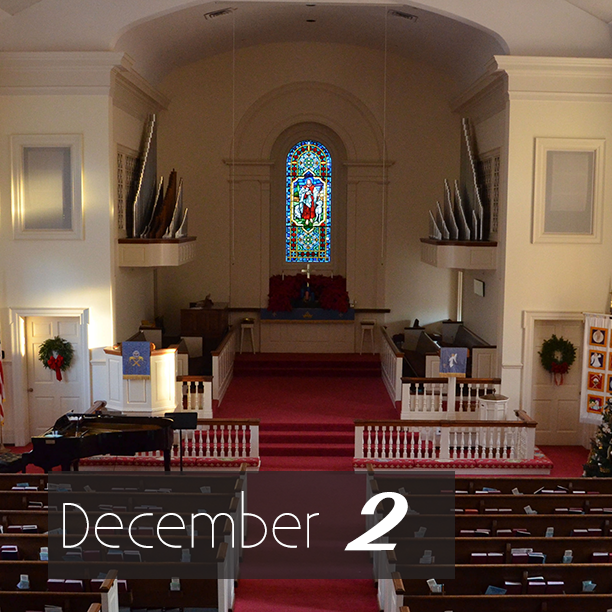 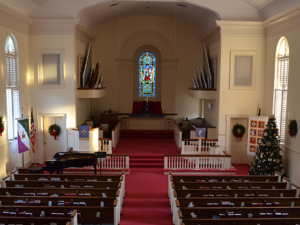 For six years, I’ve had the privilege of serving on the Trinity staff. In that span, I’ve noticed how sunlight graces the sanctuary. It filters through windows and shutters, and somehow makes a decision to showcase an assortment of fixtures. Those images intrigued me, and I wondered how we might capture the casting of that natural light.

Even though he thought I had lost my mind, Pastor Larry Lenow agreed to let us position a camera in the balcony during Advent 2016. Trinity member, Dianne Moore, was the technical genius for programming the camera’s magic. By the end of Advent we had over 10,000 photographs taken 24/7. For months, Dianne scoured the photos, and by mid-summer she had a stack for our team to review. We had to scrunch the stack down to 24 photographs for this booklet. Next, we had to find 24 brave souls who were willing to write a devotional based upon the photograph and preselected scripture. Thankfully we did.

My wife’s college roommate, Beverly Neely Bruce, was a gifted North Carolina artist. From Beverly’s skillful eyes, I learned to appreciate light in photography. A photo from her church captures the gentle grace of light falling on wood. Sadly, Beverly lost a long battle with cancer. But the light captured in her photograph reminds me how important light is in our lives.

This Advent, don’t overlook the celebration of Jesus’ birth light. Carry it with you every day of the year! 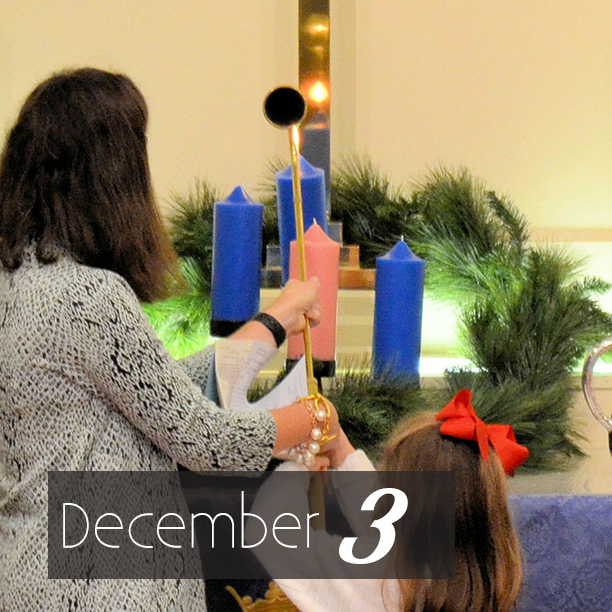 O that you would tear open the heavens and come down, so that the mountains would quake at your presence. Isaiah 64:1 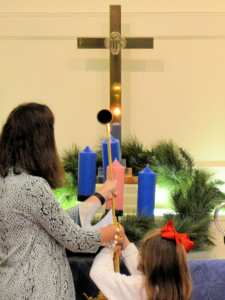 The season of Advent is a time of preparation for the coming of Christ. Take a moment and imagine what it must have been like for the Jewish communities that were anxiously waiting for a messiah to deliver them. They were yearning through prayer for the Lord to save them from the wicked and their enemies that ruled over them. I can only guess that they were anticipating an intervention from the Lord that is outlined in the passage above: that the messiah would tear open the heavens and descend from his holy throne backed by an army, that he would put the fear of God into those who did not know his name, and that they will quake like the mountains at the Lord’s presence.

How ironic that when the heavens were torn, and God did descend into our world, that he was made known to us as a babe in Bethlehem, stealing into life in the quiet of night, in a stable with only the animals to witness. Those who did not know God did quake in fear. They even sent assassins to end the small child’s life. However, the hope for a light in the darkness endured. And that is what we do during the first Sunday of Advent: we light this candle as a symbol of hope. May Christ’s coming bring a new sense of hope to the world and to our lives. O come, O come Emmanuel. 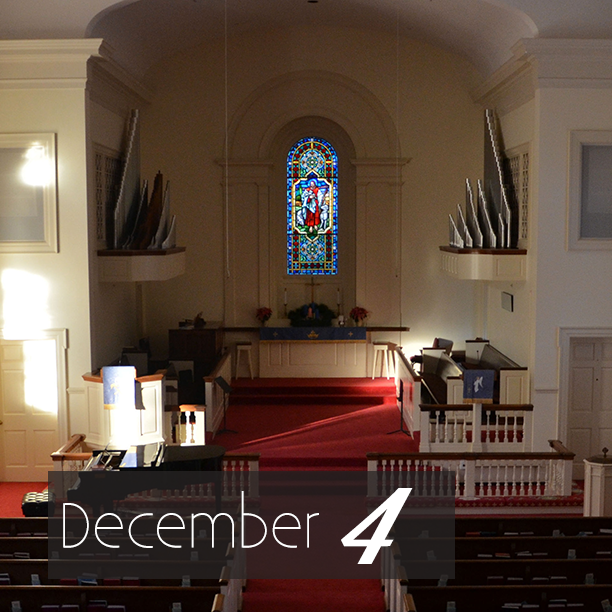 God will judge between the nations and settle disputes of mighty nations, which are far away. They will beat their swords into iron plows and their spears into pruning tools. Nation will not take up sword against nation; they will no longer learn how to make war. Micah 4:3 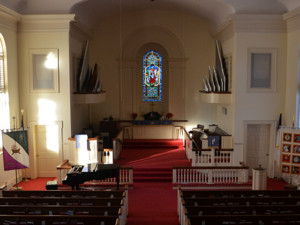 Light and darkness. Those are the first words that come to mind as I gaze at the above photo of our beautiful sanctuary. It is a late December afternoon. In the short winter days, darkness is already upon us, except for the single ray of light sweeping diagonally across the chancel. All is dark, but there is a bright ray of hope. The prophetic words of Micah 4:3 come to us in just the same way. The world of the first century and the world of the twenty-first century are full of darkness. Nations take up sword against nation and we practice war quite regularly. We also take up violence and practice war against each other. How easy it is to grow cynical. How easy it is to lose hope. In fact, it seems rather sensible so to do. The darkness is already upon us.

But in Advent there is a ray of light. There is a ray of hope. No, God’s kingdom has not been fully consummated. Nations have not yet beaten their swords into plowshares. But something has changed. A savior has come and has changed us. And like that single ray of light, we are like a candle lit in the darkness.

Someday. Someday, the prophesy of Micah will be fully realized. Until then, in that single ray of light you and I hear and find our calling. Something has changed, indeed. 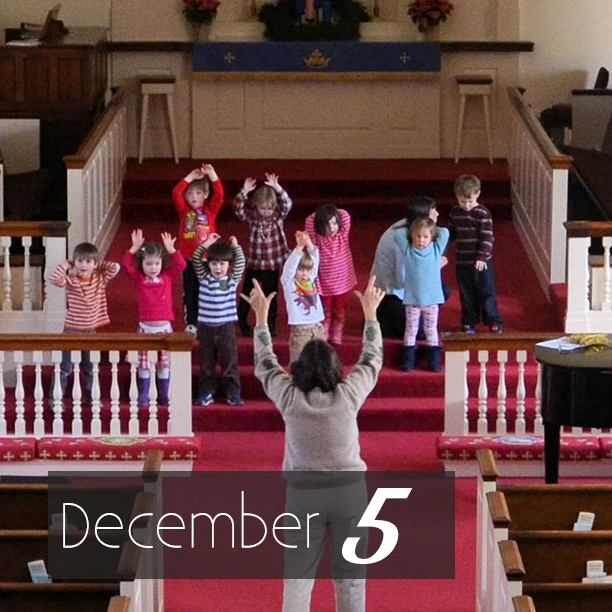 We are, after all, your people and the sheep of your very own pasture. We will give you thanks forever; we will proclaim your praises from one generation to the next.  —Psalm 79:13 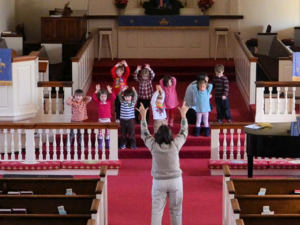 During Advent we are preparing for the coming of Christ. In this picture, the preschool children are preparing for the Christmas program. They are watching and following their teacher, much like sheep following a shepherd. When I look at this picture and read the scripture verse, I think of something my father said to me when I had my first child: “Monkey see, monkey do.” He was telling me that what I do, how I act, my child will see and follow suit. It has stuck with me as I continue to raise my children. It has made me stop and think before I act if I am suddenly cut off while I am driving or if I react to something said to me by a rude neighbor. I want to lead by a good example, just as Jesus has been the example for us. Always knowing that my children may be watching and learning from me makes me want to do better for their sake. 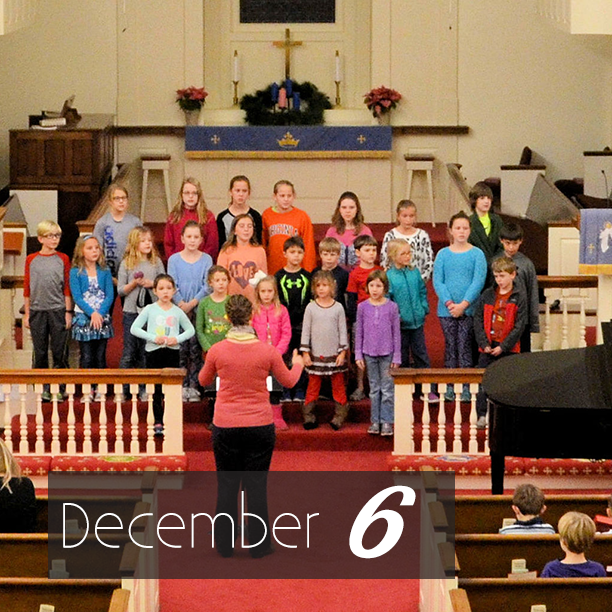 He will stand and shepherd his flock in the strength of the Lord, in the majesty of the name of the Lord his God. They will dwell secure, because he will surely become great throughout the earth; he will become one of peace. —Micah 5:4-5a 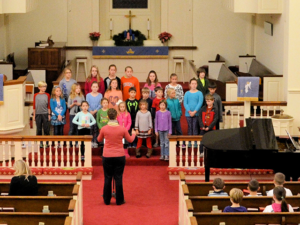 Today there are many parts of our personal worlds that are far from peaceful. We are experiencing conflicts and struggles within ourselves, within our relationships with co-workers, family, and friends, and with powers and authorities. We often aren’t sure that we have the strength to keep fighting and pray for the stability, contentment and freedom we need for ourselves and those we love.

When God calls us to “stand and shepherd his flock,” one of the pastures in which he shepherds his people is through his Word—being fed by God’s word through reading scriptures and by singing songs of praise and worship. God’s word being proclaimed through music is one of my favorite parts of the Advent season. Singing the familiar hymns and songs that we grew up singing as children brings us such comfort and peace during this time of year. We will be singing these Advent songs as we anticipate the birth of a baby in a lonely stable in the town of Bethlehem. We look to that infant as the one in whom and through whom God fulfills his promises to Israel—which are also God’s promises to us. As a shepherd, he restores us and also guides us.

As we move through this Advent season, may he be our peace. May we rest in his arms like a lamb carried by the Good Shepherd. May he still our hearts and give us time and a place of sanctuary and rest. As we experience his amazing peace, may we pass it on to those who need it the most during this season. 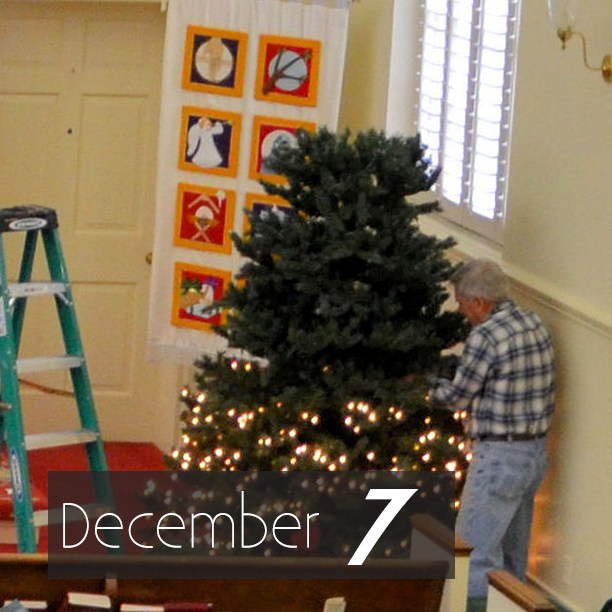 Let us acknowledge the Lord; let us press on to acknowledge him. As surely as the sun rises, he will appear; he will come to us like the winter rains, like the spring rains that water the earth. —Hosea 6:3

Who am I? I have been a member of Trinity since 1971. You have seen me here during each Advent season. My name stands for Christ Monograms (CHR-ist + MON-ogram). I am the Chrismon Tree.

In the fall of 1966, Circle 1, “The Young Mothers’ Circle” was formed. They had a Circle program on the Chrismon Tree that had started in Danville, Virginia. During the early ministry of Harold Fink, which began in 1971, members of Circle 1 of the WSCS (now UMW) made decorations for a Chrismon tree. The Styrofoam forms were cut by Carol Gill’s father, Linwood Pridgen. (Both were long-time members of Trinity.) Circle 1 made the Chrismons at Circle meetings and at their homes. In later years, Circle 3 added to the ornaments until the entire nine-foot tree was covered with Chrismon symbols in gold, silver, and white. The original ornaments are on the tree today.

All of the Chrismons used to decorate the tree are in white and gold. White is the liturgical color for Christmas and symbolizes that Jesus is pure and perfect. Gold symbolizes his majesty and glory. The evergreen tree is a representative of eternal life, which our Savior has given to us. It serves as the background for the tiny white lights, which symbolize Jesus, the light of the world.

Each year we display the Chrismon Tree to acknowledge the birth of our Lord, Jesus Christ.