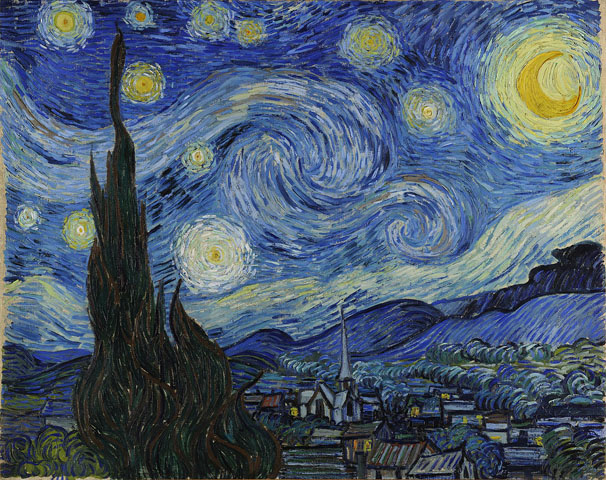 Do you know the laws of the heavens? Can you set up God’s dominion over the earth?

In today’s scripture, God and Job are having a conversation.  We remember Job – a good man who was visited, seemingly unfairly, by disease, loss, and financial ruin.  Job asks for a hearing before God, but instead God shows Job the wonders of the universe and asks Job many questions. Along the way, God invites Job to look at the stars and constellations, and then God asks Job, “Do you know the laws of the heavens?”  Confronted by the power and wondrous works of God, and his own lack of power and understanding, Job is silenced. In repentance, Job admits that he spoke of things too wonderful for him to know. Job still does not understand, and yet Job enters back into loving relationship with God.

Today’s picture is the famous painting “Starry Night,” created by Vincent Van Gogh in 1869, when he was a patient at a mental asylum near Provence, France.  Art critics suggest that the top portion of the painting may symbolize the divine realm, which appears dreamlike and unreal – just beyond human reach and comprehension.  In the middle part of the painting appears the realm of nature: the cypress tree in the front left, the hills, and the other trees.  These natural elements bend and swirl, consistent with the swirls of the sky.  The lower part of the painting is the human-made village.  It consists of straight lines and sharp angles.  Even though the human realm may appear inconsistent with the heavenly one, the church spire rises upward toward the starry sky, just as the cypress tree does.  Both nature and man reach upward, toward God.

Perhaps like Job, like Van Gogh, and like the shepherds of old, we are called to look to the sky— straining to see the brightest star of all:  the herald of the coming of our Lord.