The times were incredibly hard, and the future looked grim. The exiles were returning to Jerusalem after suffering for 50+ plus years, 1700 miles away in Babylon. They discovered the city in ruins. The Temple of the Lord was reduced to rubble, their former pastures were now a wilderness and the city’s inhabitants were hostile. They had their work cut out for them! A rather appropriate metaphor for 2021 in the wake of 2020, don’t you think?
But the word of the Lord came to those exiles through Isaiah, “Arise, shine, for your light has come, and the glory of the Lord has risen upon you.” This message told those exiles that God was with them, had a purpose and plan for them, and would strengthen them for the tough work ahead. It told them that God would strengthen them for the tough work ahead.

A rather appropriate metaphor for 2021 in the wake of 2020, don’t you think? This is why we have chosen Arise, Shine as the theme of our 2021 Stewardship campaign. Just like the exiles, we need a message of Hope; a message of Vision; a message of Action.

Trinity, all during the pandemic, in circumstances no one could even imagine, you have remained so faithful. Your financial support has allowed the critical work of the church and our outreach to the community to continue uninterrupted and in some cases actually increased.
Thank you! Thank you for your faith in Jesus Christ! Thank you for your faithfulness in the cause of Christ and Christ’s Church!

Your financial support of our ministries makes all this possible. Our Stewardship Team asks you to begin praying now about how God wants to use you to support and underwrite our ministries.

We know that in 2021 the mail is running slowly, so we will be putting our Stewardship letters online as well.

A Look at Our Year

Ministry during the pandemic has been challenging, but the good people of Trinity have been faithful. We’ve prepared a brochure to help tell the story of our year. 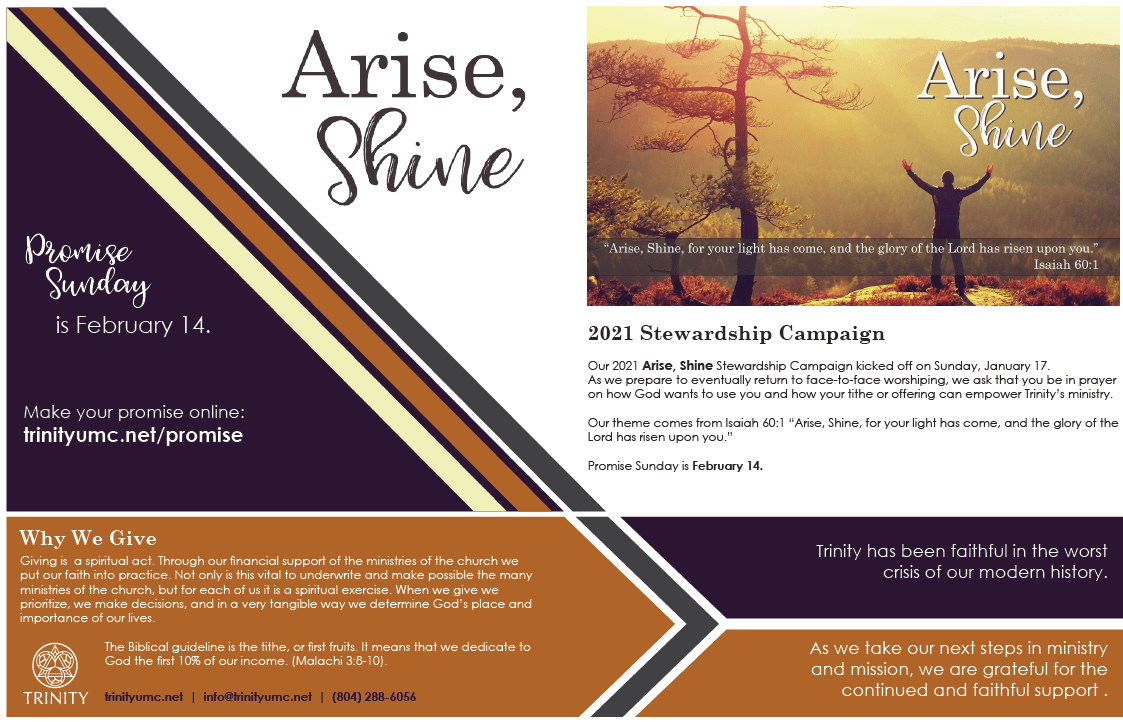 Giving is a spiritual act. Through our financial support of the ministries of the church we put our faith into practice. Not only is this vital to underwrite and make possible the many ministries of the church, but for each of us it is a spiritual exercise. When we give we prioritize, we make decisions, and in a very tangible way we determine God’s place and importance of our lives.

The Biblical guideline is the tithe, or first fruits. It means that we dedicate to God the first 10% of our income. (Malachi 3:8-10).

Learn more about giving to Trinity on our GIVE page.

Online Giving to Trinity is processed securely through Access ACS

Give as a guest