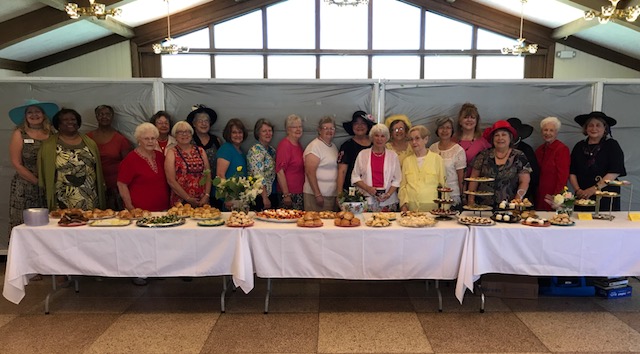 On the afternoon of Sunday, June 4, the auxiliary of UMFS hosted the annual High Tea for the residential students. The accompanying photos show the tremendous efforts of the UMFS Auxiliary in helping to make this event a success – from providing food, creating “fascinators” for the female residents, and providing ties for the young men. (Photographs of the residents aren’t allowed). Men from Trinity provided help putting on and tying neckties. Sheelagh Davis from Reveille UMC spoke about the tradition of High Tea, and Connor, the Chaplain Intern at UMFS, offered the prayer.

Appreciation was expressed by Elizabeth Buchholz , Program Director of UMFS: “Thank you all for an amazing event. The kids really had a wonderful time and it was the perfect amount of time. I saw some kids engage and get excited that typically do not. We are so very grateful to you all!!”

The Women’s Auxiliary meets at 10 am the third Thursday, members include representatives from Richmond United Methodist churches. UMFS (then known as the Children’s Orphanage at 3900 West Broad) is the institution that Dr. Joseph Mastin led immediately following his pastorate at the old Trinity building at 20th & Broad.

Bonnie and Chick Hadden, Dee Clements, Janet and Bob Sommerville, and Sharon and Rick Bauer were among the Trinity volunteers. Dee has recently served as the President of the UMFS Auxiliary.

Mary Hetzel summed up the impact of the event: “When we really take the time to make an event special with the hours and hours of preparation involved and many, many people, the work bears fruit for the Kingdom of God. This is the work of the UMW ladies across the metro Richmond area.”