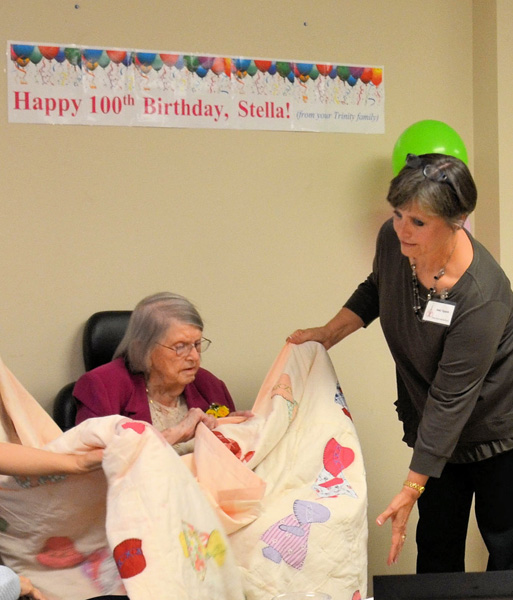 Trinity member Stella Fritter celebrated her 100th birthday on September 24, 2019, and her Trinity church family were there to cheer her on.

UMW Circle 4 (of which Stella is still an honorary member), the Trinity Visitation Teams, the Trinity Stitchers, and Trinity staff were among those who worked cooperatively to provide the following tributes in Stella’s honor:

Stella Fritter grew up in Alabama, the third of nine children.  She met her late husband, Albert Fritter, when he was in seminary at Emory. She worked side-by-side with Albert in his various postings around Virginia in the United Methodist Church.  When his ministry became affiliated with a state agency, Stella began her 17-year career as a budget analyst with the Department of Defense. Stella is a proud mother and grandmother, and her mind is still as sharp as a tack!

We are proud to claim Stella Fritter as one of our own, and to congratulate this remarkable woman on reaching 100 years of age.  Celebrating Stella’s extraordinary milestone reminds us that we regularly celebrate, love, and support each other every day – even when no one does anything spectacular.  It’s part of what makes Trinity such a special place.