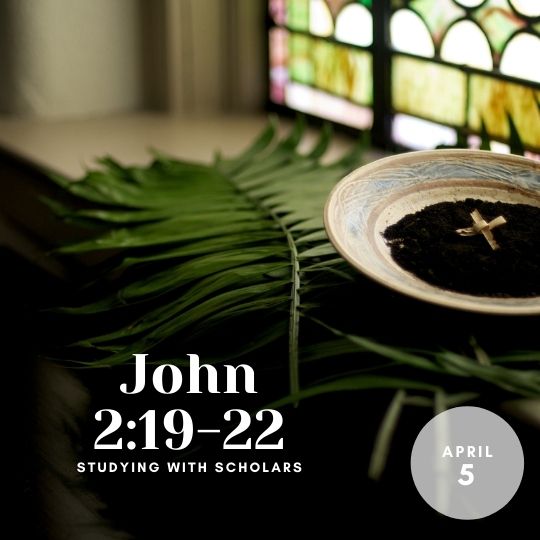 Jesus answered them, “Destroy this temple, and in three days I will raise it up.” The Jews then said, “This temple has been under construction for forty-six years, and will you raise it up in three days?” But he was speaking of the temple of his body. After he was raised from the dead, his disciples remembered that he had said this; and they believed the scripture and the word that Jesus had spoken. – John 2:19-22

It’s rare, to get a moment like this; a moment when Jesus points to some bit of the world and says explicitly, “This is my Body.” It happens in the Upper Room, on the night he was handed over to suffering and death. It happens here, when Jesus is standing before the Temple of God’s covenant people.

This Body had been awaited by the people of God. They spent decades in the wilderness, moving from place to place, wondering if there would one day come a dwelling of God among them that would bring them rest and peace. It had been anticipated, hazily outlined in the mobile tabernacles that the Israelites would construct in the center of their camps.

This Body was prepared for, purified for worship. It could not be built by David, whose hands were too stained with blood and violence. To enter this world, it required the true peace of Solomon’s Wisdom, and the consent of Mary.

This Body is a place of sacrifice, the site where life is offered over to the Lord for the restoration of God’s covenant with Israel. This life is innocent, spotless; yet in being given, Israel is restored, proven to be faithful. Built on the spot where Abraham was saved from sacrificing his son, this Temple shows us that God will hold nothing back in redeeming us from the power of sin and death: not even God’s very self.

And then all was lost. This Body was cast down, razed to the ground by the empires of the world. Babylon, in its hubris, believed that Nebuchadnezzar was the true king of the world; Rome’s governors believed that this Body’s truth was theirs to judge and dispose of. Not one stone was left on top of another, but each lay silently in the cool earth. No further worship was possible; God had deserted the people.

Yet on the third day, this Body was raised—rebuilt, in even greater glory. For this Temple is the Holy of Holies, the dwelling of God with humanity. In it, the hem of God’s majesty drapes down in our midst, uniting heaven and earth. In this Temple, the luminous darkness of God’s mystery reaches its greatest intensity, hidden in fire and the clouds of smoke and incense rising with our prayers. Here, once a year, we enter into this mystery, and know that even the power of death cannot separate us from the God who has elected us. This Temple is the Seat of Mercy, the Ark of God’s presence, Emmanuel. Here, we come in adoration: falling on our knees; stunned into silence; moved to worship with all the people of God; given a new song to sing, a psalm to raise in the courtyard of this Temple: