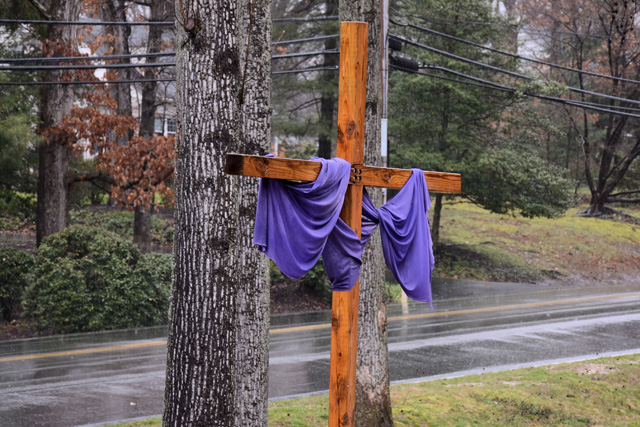 Christ crucified…. a social disgrace to the Jews and foolishness to the Gentiles.

In short, the Cross is an irrelevant source of meaning standing in opposition to most things that our daily behavior suggests we really value and believe in. To equate the Almighty, Omnipresent, Omniscient Godhead with pain, helplessness, hopelessness, shame, social rejection, career failure, despair and death is illogical. It’s the essence of foolishness. For most of us, including the writer, our Godhead should denote Power, be the embodiment of Beauty and Perfection, and be One who is certainly not vulnerable to the exigencies of this life. To speak of God as helpless in this world and vulnerable to the political, social and religious powers that killed Him when they got the chance is contrary to the way most of us think.

The Cross, that wooden crossbeam draped with a purple sheet that stands vertically in the dirt on the side of our Trinity campus bordering Forest Avenue is, when one thinks seriously about it, an irrelevant symbol for many of us. The cross was originally used for socially disgraced criminals, who, stripped of their human dignity were crucified naked and then were thrown in ditches and left as carrion for wild animals and birds. Not only does this symbol run counter to our general views of God, the Cross also makes no rational sense in a culture valuing winning at all costs, success and fame, personal popularity, entertainment with its omnipresent media exposure, power in all its forms, affluence and personal security.

And yet, this is exactly Who this Loving and Forgiving Godhead is revealed to be in The Cross – a symbol so strange and irrelevant to many.